Despite several travel destinations and natural beauty scattered all around the globe why should you choose Nepal? Well, the answer is very simple--Nepal is a beautiful landlocked country with breathtaking heavenly natural scenarios resting on the lap of mountains.

Keeping aside the natural beauty, the country is soaked in varieties of culture, traditions and of course delightful cuisines.

Here we have collected a few reasons on why the beautiful country that Forbes magazine has named a ‘Top destination for travelers to visit in 2020’ should be a top priority on your travel list.

The country is beautifully diverse, in Nepal, there are about 103 ethnic groups where 115 languages are spoken and the people follow about 5 religions. So you can witness the massive unity of such various diversifications in the truest form.

Despite having so many different ethnicities and religions, this country has never been in any kind of dispute because of their differences. The secret to that is Nepalese are very gentle people; although you might follow a different perspective and ideology in your life they tend to respect other people’s beliefs.

The interesting fact about being in the country is that it doesn’t matter what religion people follow or what ethnicity they are from; everyone is welcomed with an open arm and people believing that good soul is all that matters no matter where they are from or whom they believe to be their deity.

If you want to learn more about foreign culture and festivals, catch a glimpse of the beautiful festivals celebrated by the country whose majority population is Hindu.

As the country’s population is filled with a populace of different ethnic backgrounds and cultures; different kinds of festivals are savored by the natives almost all around the year. Among them, the biggest festive celebrated are Dashain and Tihar which are the biggest festivals in the Hindu religion. Similarly, Indra Jatra, Gaijatra, Ghodejatra, Udhauli Ubhauli,  the festival of colors ‘Holi’, Maha Shivaratri Festival, Losar, Chhath, Siti Jatra, Buddha Jayanti, the festival of women-Teej are some major festivals of the country that are celebrated throughout the year.

So, pick a perfect time to enjoy the perfect festival that you want to be part of.

3. The only Country In The Whole World With A Living Goddess-- “Kumari”

Although there are loads of mesmerizing facts about the beautiful country, the one which will leave you stunned is the presence of the living goddess in the country the ‘Kumari’.

A young Newari girl is chosen to be the goddess Kumari as an incarnation of ‘Goddess Taleju’ the divine goddess of the Malla dynasty. The tradition was later inherited by the Shah dynasty who conquered Kathmandu valley and united the nation.

The living deity has to live in ‘Kumari Ghar’; her feet must never touch the ground. The rituals are quite strict and she doesn’t leave her residence. The ‘Kumari’ is off-limits to visitors during most part of the years but, she does graces the natives with her presence during several Newar festivals where people gather around to catch the glimpse of the living goddess.

Besides having a living goddess, the country is also the birthplace of Lord Buddha who is also known as Siddhartha Gautam. He was born around 563 BC in Lumbini; his birthplace Lumbini is also listed in one of the world heritage sites by UNESCO.

You can easily access the birthplace of Lord Buddha where the sight to see is the Maya Devi Temple; the place where queen Maya Devi gave birth to him and is the most sacred part of the site where archaeologists identified the exact spot Lord Buddha was born.

Furthermore, you can also find more than 25 Buddhist monasteries built by faithful devotees of the religion from different countries from China, Vietnam to countries like France.  In those monasteries build within the sacred Maya Devi gardens, the devotees study Buddhism and meditate in a peaceful environment.

The Buddhist religion is followed by over 7% of the world population; so it is a lifetime opportunity to the followers of the religion to visit the religious site where everything started. Even if you are not a Buddhist, witnessing the foundation of such holy persona is certainly a not-to-miss opportunity. The site is so peaceful; it helps the troubled souls to reach the state of the serenity, so, definitely mark the Lumbini on that travel map.

So, now talking about the precious heritage, the country boasts 10 of the world heritage sites that have been listed by UNESCO. The seven of such important cultural heritage sites are in Kathmandu valley--alone.

If You want to explore more the birth-place of Lord Buddha Lumbini, Chitwan National Park, and Sagarmatha National Park are your priorities to explore all the world heritage in the country listed by UNESCO.

The country engraved in rich culture and traditions, filled with natural beauty; adds flavors in all those entities holding the 8 of the tallest mountain all around the globe.

So, while you are at it make sure to witness the wonder of mother nature resting at such magnificent heights.

When it comes to cost management and your tour expenditure, you will hardly find the services and quality that can compete at the prices provided in the country. You can enjoy a satisfying accommodation facility at 2 stars hotels where the price starts from just $7 per night.

However, the prices can vary in the top-rated hotels in the country where you will get facilities and services per hotel standards.

In addition to affordable and quality services, you can choose a homestay in the country. This way you will be able to share the local lifestyle, culture, and traditions of the localities up-close. This practice is quite popular among western tourists who like to enjoy the home-like environment. Your home-away won’t be much farther from your homely environment. To top it all you can learn a bit of local language and develop a bond of friendship that might not have been possible at hotels and inns.

The mixture of several ethnicity and culture certainly bring varieties of dishes on the table. You can enjoy the delightful local cuisines in the country; the foremost meal that is cooked almost in every kitchen of the country is Dhal Bhat Tarkari (lentil, steamed rice, and curry vegetables)

Other famous star dishes of the country like MoMos and Chowmein are also quite popular among the natives. MoMo is a steamed dumpling that comes in all packages; steamed, fried, and gravy (sea). Similarly, Chowmein is also a very popular dish in the country but, nothing beats the delights of a Newari Khaja(Newar Lunch Set) set if you enjoy hot and spicy food.

The country also offers other joyful dishes like Sel Roti, Thukpa, Dhido, pulao, Chatamari, Aloo Tama and so on. So, make sure to eat your fill and decide which one becomes your next favorite dish.

If the local cuisine doesn’t sit well with you, then you can also enjoy the dishes influenced by western culture; almost every hotels and restaurant in the country serve Chinese, Indian, French and overall all other Continental dishes with a bit of home touch.

You can take a jungle safari and explore the wildlife from up close or feast your eyes with the colorful diverse breed of birds that are preserved in Chitwan National Park and Bardia National Park. You can also witness flocks of birds migrating to Rara National Park and Koshi Tappu Wildlife Reserve during the winter of the Northern Hemisphere.

The best thing about visiting Nepal is that you will be never bored. Even after soaking in the local culture, traditions, wildlife and natural beauty of the country there will be still room for many tons of other activities.

You can schedule a time for sporty activities like rafting, bungy jumping, paragliding including mountain biking, rock-climbing. You can enjoy zip fly as well in Pokhara, the zip line connects Sarankot and Hemja VDC in the city of lakes.

Many travelers are fond of the best routes for trekking and mountaineering the country has to offer. Among those trekking routes Mustang trek, Annapurna Circuit, Langtang trek, and Everest base camp trek are quite famous among the travelers.

So, in conclusion Nepal is a wonderful country that has a lot to offer to the guests. Decent genuine people and marvelous culture will certainly make you feel warm. The natives who practice the motto “Atithi Devo Bhava”(The Guest is God) will certainly leave you amazed and dazzled during your stay. However, make sure you choose the right traveling agency that will provide uppermost satisfying services. You can choose goGlides, one of the renowned travel agencies in the country to manage your adventurous expeditions which definitely will make your expenses worth the experiences. 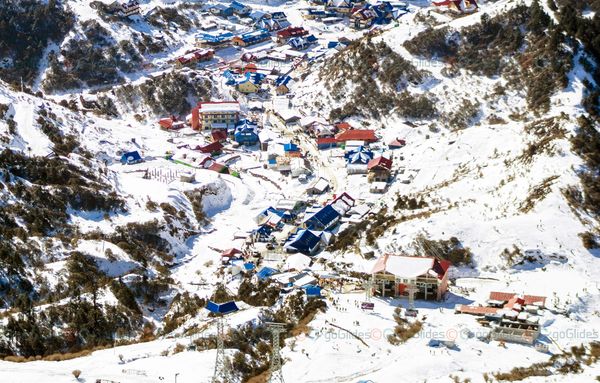 General Summary of KalinchowkKalinchowk is a beautiful rural municipality in the Dolakha district of Province No-3 which lies in the north-eastern part of Nepal at the elevation of about 3842m.