When is the ideal time to go for trekking in Nepal? It is one of the trickiest questions pricking the minds of tourists planning to visit Nepal. The summer monsoon season (i.e., June to September) brings freshness and growth, but it is, unfortunately, the best time to avoid the treks. Despite being one of the smallest nations in the world, Nepal is the land of extremes. Nepal’s terrain spans across from the highly fertile areas at just 700 meters from the highest point on the planet to the mighty Everest that stands at 8848 meters.

Nepal’s extreme diversity also relates to the seasons or the weather patterns of the nation. Nepal’s Terai region stays humid nearly throughout the year, with the temperature reaching up to 45 degree Celsius.

On the other end, Nepal’s medium hilly areas have pleasant weather with a moderate climate throughout the year. Also, the northern Himalayan regions have freezing winters with an alpine climate, and the temperature drops drastically at an altitude of 3300 meters.

Nepal has two major trek seasons: late March, i.e., the spring, and April when Nepal’s beauty is at its peak due to the bloom of rhododendrons and several other fragrant flowers. The days are longer, and the climate is pleasant.

Another ideal time to go for trekking in Nepal is the autumn, i.e., late September to early November. The days are shorter and colder; however, the skies are clear and provide better clarity for sightseeing.

November and December are associated with magnificent skies; however, the weather is freezing. If you trek the trails like Everest Base Camp or Annapurna Base Camp, which are quite busy in spring, will be less busy then.

While you can go for trekking in Nepal anytime during the year, each season in Nepal delivers a different experience, environment, and landscape. Most trekkers prefer going to the Upper Mustang Trekking in spring. Also, you will be required to prepare a touch differently depending upon the season or month your plan to go trekking.

The most favored times with a satisfactory trekking experience are classified into the 4 “peak seasons” given below:

Autumn (September-November)
The best time to go for trekking in Nepal is during the autumn season, i.e., September, October, and November. During this season, you can expect tantalizing mountain views and excellent weather. The temperature remains moderate, making it a pleasant and comfortable time to go trekking. Also, the sky remains mostly clear and provides breathtaking views. At times, short storms may dump substantial snow in areas with high altitudes.

Winter (December-February)
The winter season is associated with clear skies in Nepal. The temperature remains cold in December, January, and February. You can expect frequent snowfalls with colder temperatures and brisk winds at high altitude regions. Therefore, most trekkers prefer to trek in the lower altitude regions.

Those in search of incredible and enthralling scenery can trek the regions of lower elevation during the winter months.

Spring (March-May)
In Nepal, the spring season is the best time for mountain climbing and trekking. The spring provides a wide range of excellent and spectacular mountain views, including wild flora blooming of the massive rhododendrons at over 3000m, making it excellent and pleasant weather for high-altitude trekking. The temperature remains gently warn at lower elevations and relatively moderate at higher elevations of more than 4000m, which offers delightful mountains view during March, April, and May.

Summers, i.e., June, July and August months, fall into the rainy season in Nepal and are associated with frequent heavy rainfall, which makes the rainy season unfavorable in Nepal. However, you can enjoy certain treks to Tibet and other regions connecting Tibet to the desert areas of Nepal such as Nar-Phu valley, Dolpo region, and Mustang.

Also, there are several summer trekking alternates behind the Himalayas rain shadow regions that you can enjoy during these months.

There are two main factors to consider while planning a trip to Nepal: the weather and crowds. As a thumb rule, the better the climate, the more tourists make their way to the trails in Nepal. October and November are the peak tourist months in Nepal when most hotels and flights are packed to capacity. During these months, you can expect the Himalayan trains in Nepal to be horrendously busy.

The autumn season is associated with cold nights in the mountains; however, the sun warms up the climate during the day to provide you a comfortable environment with the temperature hitting the high 20s° C, and the low 5° C at during the night, between 2500 - 3500 meters.

Mornings are mostly clear while the clouds turning up towards the noon. The cloud cover makes way to a spectacular starry sky at the night.

While you can trek in Nepal all year round, the most favorable time is during the peak season when the climate with a bit warmer and more comfortable, and the sky is clear to provide you a panorama of scenic beauty. If you mind the crowds, consider going to the less-trodden trains like the Everest Base Camp and Gokyo Lakes Trek.

Most tourist agencies will avoid trekking during the off-peak tourist seasons and, therefore, you must search for alternative advice since you must be a experienced trekker to trek the trails in Nepal during the winter months when the temperature often drops considerably, and most trekking routes are snow covered.

The Arches National Park, located in eastern Utah, is known for its dark red rocks that make up most of the landscape. The park is nearly 76,679 acres of the desert over 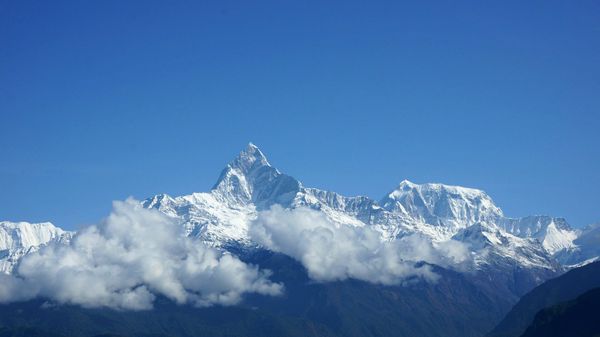 So, you’ve decided to visit Nepal to enjoy breathtaking landscape, a diversity of breathtaking views, and dare to take on the Annapurna base or Annapurna Circuit trekking. But, you’re not sure

Goglides.com | Travel Guide and Travel Reviews, Make Free Travel Website
—
What is the best time to trek Nepal?
Share this