Indra Jatra is the exciting, one of Nepal's biggest street festivals, a celebration for Lord Indra in Kathmandu, valley. It is also known as Yenya, meaning "Kathmandu festival" in Nepal Bhasa. Indra Jatra is an eight-day long festival that generally falls in Nepali month Bhadra or August to September in the solar calendar.

The King of Heaven, Indra, is also known as Lord of Rain. The decorated chariot procession(march) of the Living Goddess, Kumari, is the festival's main attraction. The celebration looks so grand with the dances of the masked deities, Lakhes, lights, and color.

It is a cultural festival observed mainly by the Newar community in Kathmandu valley. It is the auspicious occasion for showing appreciation and thanking Lord Indra for the earth's rain. It is celebrated by Nepalese for praying Lord Indra and mother queen Dangi for rain and good harvest and also remembering the departed family members in the last year.

According to mythology, Indra, the king of Heaven, came down to Kathmandu valley disguised in human form to take Parijaat(a pure white flower) for veneration ritual for his mother, Dangi. People didn't recognize him as Lord Indra and caught him with rope for taking flowers without their permission from their garden. The elephant (Pulusiki) searched through Kathmandu's passages and streets but could not find his master.

Knowing about the capture of Lord Indra by people on earth for seven days. Dangi came down to earth and let the people know about the Indra. People in Kathmandu valley released Lord Indra. So, Dangi was happy, and she promised two things to the people. One was to take the people to Heaven who died in the year back. The other was to provide proper rain for a good harvest throughout the winter season. People were glad for the blessings and started celebrating Indra Jatra at Kathmandu, Nepal, showing gratefulness towards Lord Indra and mother, queen Dangi.

King Gunakamadeva started Indra Jatra after the establishment of Kathmandu city in the 10th century. People remember their departed family members in the past year during the festival. The Indra Jatra lasts for eight days, which is a public holiday in Kathmandu valley. Indra Jatra also marks the beginning of Nepal's festive seasons, followed by grand Dashain and Tihar.

Malla king, Jaya Prakash Malla, started the Kumari Jatra chariot festival. Indra Jatra and Kumari Jatra have coincided together in 1756 AD during the Malla dynasty's reign by Jaya Prakash Malla. The Kumari chariots go through the southern part of Kathmandu on the first day. The second day is known as Thaneya, and the route is the northern part till Asan. People pull the chariot pulled through the central section of Kilagal and is known as Nanichaya.

Yenya Festival consists of two parts of the celebration, namely Indra Jatra and Kumari Jatra. The festivities of Indra Jatra include the flagpole ceremony, blood sacrifice, displays of Bhairava's masks, etc. During Kumari Jatra, the living goddess will take the chariot to march through the streets of Kathmandu.

People will enjoy the whole week of Indra Jatra with attractive traditional dances witnessing the pulling of chariots of the goddess Kumari, Lord Ganesh, and Lord Bhairav through the different the Kathmandu city. In Indra Chowk, you will see the great Akash Bhairav with huge silver eyes and crowns and serpents decorated with flowers. The myth brings the story of Akash Bhairava to be the head of Kirat King Yalamber. People worship Akash Bhairav, singing bhajans and hymns every night in Indra Chowk.

During Indra Jatra, there are various performances, including Bhairav dance's dances, Majipa Lakhey, Pulusuki dance(Aerwat Haathi-Elephant dance) Mahakali, and many dances from the different part of the valley. One can see the Dash Avatar(ten human incarnations) dance of Lord Vishnu every night of Indra Jatra.

How is Indra Jatra celebrated?

On the first day, the Newar community of Nepal observes the day remembering all the demised during the past year. They offer oil and butter lamps and carry through along the traditional route of the city's different parts.

The Jatra starts by erecting the pine pole at Kathmandu Durbar Square(Basantapur Square) in the old Hanuman Dhoka Palace.

Numbers of people gather together to raise the pole, a grand ceremony with hundreds of viewers and people taking part in it. While passing by the white Bhairava mask, the living goddess Kumari stops to greet him. After paying respect to Bhairav, the environment becomes musical with cultural sounds all over the Kathmandu valley.

The local liquor starts to pour from Bharirav's mouth. People have a belief that getting a sip of the liquor beer brings good fortune. A small goldfish is in the liquor in advance. The person who got the fish is the most fortunate, and the goldfish will bring happiness and good luck for the whole year.

The Goddess Kumari will always be under the protection of God, Bhairav. Goddess Kumari stops to greet while passing by the great Bhairav image paying respect to him. The people take the procession of a beautiful chariot with Goddess Kumari through the main streets of Kathmandu, which is also known as Kumari Jatra.

People pull the chariots of Living Goddess Kumari and two smaller chariots of Lord Ganesh and Lord Bahirav along the valley's route through Kathmandu Durbar Square. The cultural and classical dancers, mask dancers with different masks and costumes resembling other Hindu deities, follow the chariot procession. Indra, the cultural masked Hindu deities and demons, dances throughout the streets celebrate the rain god's visit.

Pulu Kisi is a beautiful display of an elephant, Aerawaat, who is the carrier of Lord Indra. People have a belief that Pulu Kisi came to earth searching his imprisoned master. So, Pulsiki goes dancing through the streets of the ancient city of Kathmandu. The residents if Kilagal tole generally performs the Pulusiki dance.

The masked elephant keeps making sound with anxiety and triumphant sounds running through the streets and knocking people on the route with fantastic gesture swinging its tails. There is a group of the musical band with a torch carrier.

During Indra Jatra, the masked dances of deities and demons are performed on the streets and market squares. Some popular dances are Lakhe Naach, Mahakali Naach, PuluKisi Naach, and Dash Avataar Dances. You will also see Swet Bhairava as well as various deities of the city.

The cultural dances resemble the sacred masks and display in honor of the Hindu deities. The Lakhey keeps on dancing along with the sound of the local traditional pieces of music. The Lakhey helps in maintaining crowd control before the chariot procession, creating a festive mood.

Lakhe are heavily masked dancers who signify the different deities. You will enjoy watching Lakhe, dancing on the streets mainly in the evening times following the Masked dancers known as Lakhe, to the streets almost every evening accompanied by loud drums. The musical drums are so enthralling. I love it.

People put the oil in the shrines and ancient palace buildings around Kathmandu Durbar Square. So, we see the glowing scenes at nights with lights. Every night, the DashAvatar Dance, which means ten earth incarnation dances of Lord Vishnu, is shown in Durbar Square in front of Kumari Temple.

Living Goddess Kumari takes a glance out of the window of one of the historical sites in Kathmandu, Durbar Square, Nepal. The afternoon before the full moon, people gather near Hanuman Dhoka Palace to catch a glimpse of the Living Goddess Kumari, a little girl chosen from the Newari community representing Goddess Taleju.

During Kumari Jatra, one can get a glance of Goddess Kumari in the whole year. People pull down the Linga (raising pole), which signifies the end of the Indra Jatra festival. People take the wooden linga at the meeting point of holy Bagmati and Bishnumati in Teku for the rest.

With the beautiful ceremony, Indra Jatra ends with welcoming the festive season of great Dashain and Tihar throughout the country with great enthusiasm.

People offer buffaloes, goats, roosters, nuts, fishes, cereals, and many honors in Kathmandu valley's temples. Later the offerings and the Samaya Baji (authentic dish of the Newari community)are distributed to all the devotees. Jaad and rakshi, the local Nepali liquor, flow from the Bhairab statue's mouth, which is the blessing and offering. The crowd of people waiting for the liquor in front of the Bhairab statue is impressive. It is the incredible moment you will see in Hanuman Dhoka.

The three golden temple chariots for Goddess Kumari, Bhairav, and Lord Ganesh are brought outside the Kumari Temple, a day before the ceremonial military parade. The Nepalese officials and the consular staff observe the impressive army parade gathering in front of Gandhi Baithak at Kathmandu Durbar Square. The chariot procession lasts for three days. People gather together at Durbar Square with their festive cultural costumes.

Kumari's chariot procession begins soon as the ceremonial parade ends. The routes of the Kathmandu valley becomes so crowded with cheerful locals and visitors. Finally, the living Goddess Kumari is taken throughout the Kathmandu valley without letting her feet touch the ground. There are some people to protect those deities and scatter the flowers as blessings to the crowds. You'll see more than ten people pulling the chariots. The president of Nepal would pay homage to the goddess Kumari. Then the ceremonial parading procession leaves Durbar Square to Hanuman Dhoka, where the living goddess greets the image of Bhairava. While Kumari marches around Kathmandu city, people will act out the story of Indra along the route.

In present days, the Nepali Newar community celebrated the Indra Jatra festival in Sikkim, India also with great enthusiasm. It feels great to see our Nepali cultures and festivals flourishing in other countries, too, with cultural harmony.

Due to the coronavirus outbreak, there won't be a celebration of Indra Jatra this year for the first time in Kathmandu valley. It is probably the first time Indra Jatra won't have many exciting displays and flourish like in the past.

Indra Jatra is an eye-catching street festival of Nepal with chariot procession festivals, masked cultural dances, religious ceremonies, lights, and colors. You will enjoy the Indra Jatra in Kathmandu Durbar Square. Everyone is free to visit during the festival. Don't miss you're the golden opportunity to take a glance at the living goddess Kumari and capture her glance.No worries, if not this time. You can enjoy the incredible celebrations and chariot procession in your future visit. The Indra Jatra is worth enjoying during your visit.

Feel free to contact us for trips to Nepal. 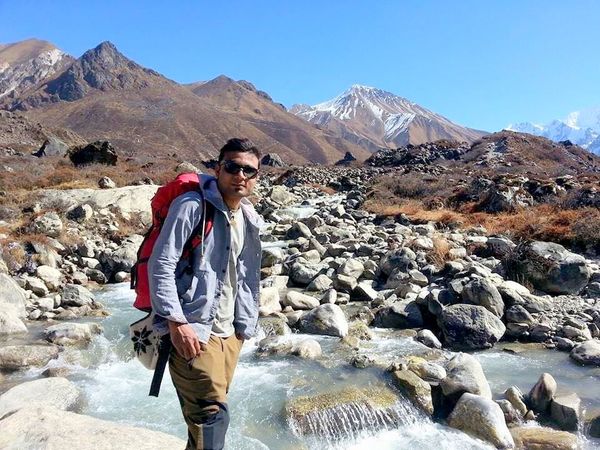 Are you looking for more accessible and wonderful trekking? The valley of glaciers: Langtang Valley lies in the north of Kathmandu valley with about 30 kms away. Langtang Valley-Photo courtesy: 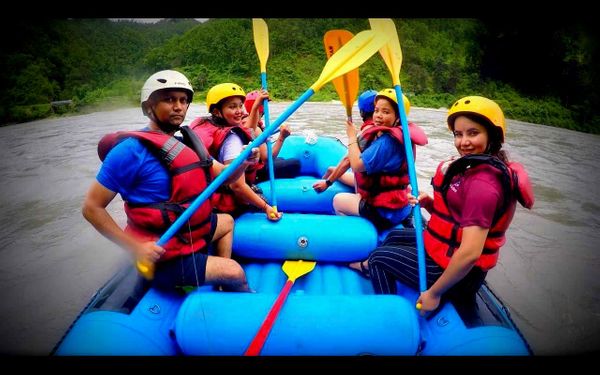 White Water Rafting is a popular adventure sport in the rivers of Nepal. It is more popular and comes in the people's choice as it is a more affordable adventure